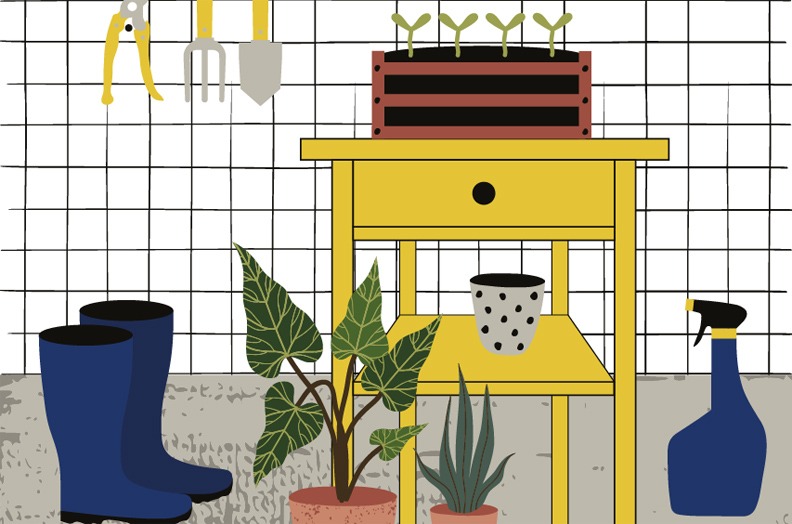 Gardening is a waiting game and it can take months, even years, to see the best results. However, when growing vegetables, some crops will be ready to eat only a month after sowing and there’s nothing better to motivate you to grow more.

Sowing seeds is relatively straightforward. Just pop them thinly on a layer of soil and cover with a little more compost. Remember, though, that one packet of seeds often equates to dozens of plants. You’ll usually find the number of seeds listed on the back. In some cases, it’s easier to buy a young plant at a garden centre than to sow seeds early that then need space indoors to germinate. If you do find yourself with an excess of plants, speak to friends and neighbours. They may be happy to do a swap. It’s worth planning ahead in future years — you agree to buy one type of seeds and get a gardening chum to buy another. And have your pots at the ready!

A sunny windowsill is all you need to grow chilli peppers. Simply buy a young plant at a garden centre. Look out for the Hungarian Hot Wax as it grows quickly and gives a reasonable crop. Pop it in a pot, water and watch it grow. The earlier you plant the better as the flavour and heat alters with its colour. First there’s the mild green chilli, then the hotter yellow variety and finally the fiery flavoursome red chilli pepper. High in vitamin C.

You’ll only need one or two courgette plants (each can produce up to 30 fruit), so it’s easier to buy young plants. A large pot around 60cm in diameter is required, but once planted, the courgette can be left to go about its own business. Keep them well watered and regularly check for slugs who love courgettes. A good source of vitamins A, C and E and the yellow flower is also edible.

The dwarf varieties, which grow to about 30cm high, are ideal to grow in pots. The seeds also tend to be larger than other veg so they are easier to sow. Soak seeds for 30 minutes beforehand to soften their skin and encourage germination, then push two or three into compost in a 30cm diameter pot. After eight to 10 weeks you’ll see results. Pick beans regularly to encourage new growth.

Sow direct: April to July. Harvest crops: May to October.

Don’t be too confused by the different ‘first earlies’, ‘second earlies’, ‘early maincrop’ terms. All you need to know is plant earlies by early April and maincrops by the end of the month. Buy potato tubers from garden centres and allow them to chit — put in an empty egg box in a cool dark place. When you see a few new nodules, plant three tubers in around 10cm of multi-purpose compost at the bottom of a deep growing sack. As they grow and new shoots appear, cover with more compost. Do this two or three times until the sack is almost full. When the shoots flower, have a feel around to see if the potatoes are big enough to lift.

Sow direct: February to April. Harvest crops: May to October.

Although fairly easy to grow direct, sweet peppers need a long sunny season to mature, so buy a couple of young plants and get them into pots early. Tip growbag compost into a 30cm-diameter pot for the best results and when flowers start to appear, ‘tickle’ or hand-pollinate each one using a soft paint brush or feather. To prevent plants from growing too tall, use your first finger and thumb to pinch or remove new stems growing upwards, encouraging the plant to grow bushier.

Rocket grows quickly. You’ll be able to harvest your first crop and enjoy spicy leaves within four to six weeks of sowing. Sow seed thinly straight into a pot, or if you eat a lot of salad, sow a growbag of mixed salad leaves. Pick leaves frequently with your hand or scissors to encourage further growth.

Sow radish seeds direct into a pot and you’ll see results in as little as three weeks — it’s the ultimate fast food. For the best peppery taste, pick radishes when still small and tender. Plants will tolerate a little shade but don’t let them dry out. Rich in potassium and vitamin C.

Rich in iron, as well as vitamins A and C, spring onions are ideal to grow in pots, or slot into gaps in flowerbeds. When sowing direct, leave a space of around 8cm between seeds. Sowing in small amounts every few weeks will give you a steady supply.

Sow direct: March to July. Harvest crops: May to October.

Although it takes a while to grow, once you’ve tasted the intense flavour of garlic from the garden, you’ll realise it was worth the wait. Buy either individual cloves or a whole head of garlic, which you then separate, from the garden centre. You’ll need deep pots, or use a potato-growing sack, and bury the cloves, pointed end facing up, 5cm below the surface. Keep moist but don’t overwater. Shoots will pop up and then wither. At this point, your garlic is ready.

Okay, so tomatoes are technically a fruit, but they are still very easy to grow, especially the bushy Tumbler variety that is perfect for hanging baskets. Grown outdoors in full sun, they’ll be packed with vitamin C. Fill the basket, or pot if you prefer, with growbag compost, then pop in the young plant. Don’t allow the soil to dry out — you may need to water twice a day in the height of summer. Again, hand-pollinate the flowers, and once you see fruit, regularly feed with tomato plant food.